Since October 2002, I was a student of about 200 who began their computer science studies at the Friedrich Alexander University of Erlangen/Nürnberg that year. 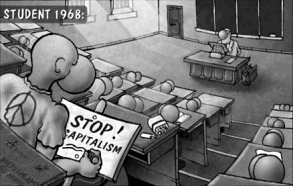 The bigger part of the university is located in Erlangen, the Faculty of Engineering is in the very south near the B4 in direction of Tennenlohe.

It is quite a change from school to university, at least at the beginning. There are some more people sitting in the auditorium where the professor explains something into his microphone somewhere in the front. But listener numbers fall quickly as many don’t deem it necessary to visit the lectures. And in the main study period, from the 5th semester on, ways for selecting the personal focus and courses are more widespread so that the participant numbers are in the order of 1-2 school classes and some lectures have a very personal touch.

The basic study period in computer science firstly teaches you all sorts of basic knowledge: Algorithmics, Mathematics, Organisation and Technology of Computer Systems, Theoretical Computer Science and Systems Programming. They explain mathematical basics with which you can look at the world of numbers in a much more abstract way than you could imagine after maths advanced course in school. And you learn about data management and processing, first with generally described algorithms and later with real computer programs. Then I got new insights into how operating systems, computer electronics and logic circuits work. With all that knowledge that well fills the gap between 9th class physics and a graphical window system, you get a very different understanding of the technology.

With a little incomprehension we learned the programming language Scheme right in the first semester. As a functional language with closures and its very own principles it was a tough nut to crack even for the already “programming experienced”. A few years later I first really used JavaScript and I was lucky to have heard of all that already.

In theoretical computer science they explain things to you which are hard to understand. Some of it indeed teaches you new working methods and thoughts that you can use reasonably later – but they really did exaggerate.

Later I could choose my study focus. As I’m more of the practical kind I have decided on the areas of databases as well as operating systems and distributed systems. So I have programmed by own operating system whose only purpose should be to run a Pacman™ game in text mode with no mouse. But shortly after the multi-threading capabilities the semester was over, and the priority-based scheduler which I have tried to complete then somehow wouldn’t work so well. 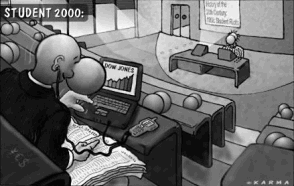 You definitely get greater respect for people who are working very deep down in an operating system! The basics I learned about conceptional design and architecture of database systems I could soon apply in my own web forum software which I had developed for some time already. The SQL skills I acquired before have also helped me to do the excercises.

I did not continue the elective of business administration from basic study period. The basics were enough for me and the outlook was detering. Instead I went to astronomy to which belonged a two-week practical training (or seminar) at the astronomical institute in Bamberg, taking place end of February. At the very first evening the weather allowed us to look into the sky a bit – and who can claim to have seen the rings of Saturn with his own eyes? The other days were mostly overcast so that we rather did mathematical and theoretical excercises.

My student research project was about “Design and implementation of a controlling system for building automation components” at the operating systems/distributed systems chair. That gave me some insights into techniques of weather observation and building automation. My final lectures were computer graphics and interactive computer graphics at the computer graphics chair. There I learned the basics from rendering simple geometry onto a screen up to complex three-dimensional processing of interactive virtual worlds, with practice and mathematical background. My experiments didn’t exceed the excercises with OpenGL by much though.

In the last semester I wrote my thesis about “A knowledge portal for enterprises with AUDI AG as an example” at the databases chair. In short, the purpose of my work is an automatic expert search to improve cooperation between universities and enterprises. Beginning of April 2008, this work was finished and so were my studies. From then on I have something like a master degree in computer science (there is no English translation for the actual degree).

Therewith my formal training time was over. I am not interested in a doctorate as I don’t see any personal or economic use in that for me.