Rethink everything, from the ground up, and don’t look back. – A few sentences about me and this website. 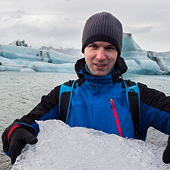 My name is Yves Goergen [ˌiːv ˈɡœʁɡən] and I am a 39-year old computer professional who likes spending a lot of time with these devices. I assemble computers for myself so that I can take care for the details I’m otherwise missing. If something is bugging me about an application, I like to think about doing it differently myself. Then all sorts of ideas come to my mind and sometimes I come up with unusual concepts. Along the way, every now and then useful programs or code snippets accumulate which at times I publish here, most of it under an open source licence. You can marvel at my other hobby in my HD photo gallery.

After finishing school and national service, I’ve been studying computer science (informatics) for 5½ years at the University of Erlangen. My focus was on databases and operating systems/distributed systems. After almost 10 years as an employed software developer I co-founded my own company (more on LinkedIn and XING). Besides several programming languages I can read, write, speak and understand pretty much all of German (also Franconian and Bavarian to some extent), quite a lot of English and also some French and Dutch.

A note on page translations

While all content on this site is available in German, the English translation is partially incomplete and may never be finished, especially where the presented software only speaks German. In such cases you could give automatic translation software like Google Translate a try. (Always translate from or to English, anything else seems to stop over English and add more errors in a second round.) If all fails, please just drop me a line and I’ll do my best to translate the missing parts myself.

What happened so far

My activities on publishing software on the web have quite some history by now. My first attempt was on software.unclassified.de with a DIY CMS (traces date back to the summer of 2002) that was just primitive, seen from today’s view, and its contents were hard to maintain. It was replaced by my web laboratory on beta.unclassified.de which was opened in April 2006. Besides several C# source snippets and little tool programs, there were occasionally also shorter articles on other applications or computer hardware. By July of 2007, the design was mature and has served well for several years, while more and more code snippets, classes and applications were added.

After I had redesigned my personal website in a more modern style mid 2011, my software site should also get a renovation in the same style. During development, this site’s design has further evolved again and my personal website was discontinued for lack of visitors and its contents was arranged elsewhere. This website, 3rd generation, was eventually published in December of 2012 on dev.unclassified.de after finishing tòmò. In January 2015, it moved to the new domain unclassified.software with no further changes.

This version of the website features a stable language selection, supports small screens (smartphones) through CSS Media Queries, and brings a few new releases again. Additionally, the URLs are implemented entirely virtual (URL Rewriting) which allows me to precisely control the URLs, translate pages without duplicating all files, and perform easy redirection of non-existing addresses.

Also for this site, I did’t shy away from current web technologies. Many of the graphical elements can be programmed with CSS alone, no additional image resources and no extensive graphics editing. Moreover, web fonts take care of a consistent and modern type face. By the end of 2012, Mozilla Firefox has the greatest support for that, directly followed by Google Chrome (both in the latest stable versions). Opera can also render most of the elements. Microsoft Internet Explorer 8 (Windows XP) by far doesn’t display everything, but that at least mostly free of errors. Internet Explorer 9 (Windows 7) further improves that impression. While Internet Explorer 10 (Windows 8) promises much more CSS support, and also delivers, it remembers the old tradition to make mistakes so that I already had to disable some new features again.

The fonts used here are supported by all current browsers, except Internet Explorer 8 (Windows XP). The classic ClearType font smoothing leads to the well-known jagged edges at some letters. DirectWrite displays text much better, but it’s only available from Windows Vista on and in Internet Explorer and Mozilla Firefox. (As of 2016, Chrome also renders text with DirectWrite, but still only Firefox delivers a visually pleasing appearance on Windows.)

Many of the little icon graphics on this website come from the Oxygen theme, a collection of beautiful, freely available (Creative Commons) icons. The country flags come from the Wikipedia and I have scaled them down myself. Other image sources are indicated as hyperlink on each display.

All texts are my own, unless otherwise stated. There are no guest authors or sponsored articles on this website.